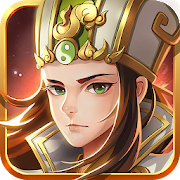 2018 Mobile Games Hottest Three Kingdoms! Players will become a character in the game, collecting three military commanders and embark on the path to success.

【FEATURES】
◆ interdisciplinary Siege war in the country, reflecting the strategy and its strength
Tribal hegemony of the Three Kingdoms is on the verge of fire, and it fit the player’s camp.

2- if you played with mod before, you can install new mod over it.